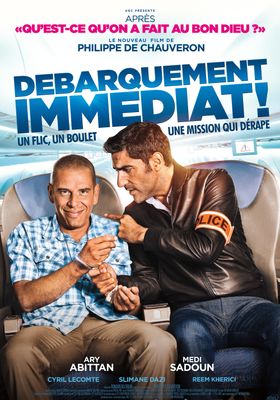 2016 ・ Comedy ・ France
Rate
Débarquement immédiat!
2016 · France · Comedy
1h 30m
French border cop José Fernandez has just one last extradition to do before his long-awaited promotion to the crime bureau. But his detainee Akim, victim of a judiciary glitch, is outraged to find himself saddled with the identity of a potential terrorist and put on a flight back to Kabul, where he has never even set foot before! What starts as a routine trip for Fernandez and his skirt-chasing partner Guy goes haywire when their plane is grounded in Malta, forcing them to bunk up with Akim, who will stop at nothing to avoid extradition!