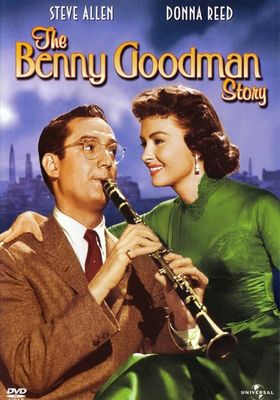 1955 ・ USA
Rate
The Benny Goodman Story
1955 · USA
1h 56m
The Benny Goodman Story is a biographical film starring Steve Allen and Donna Reed, directed by Valentine Davies and released by Universal Studios in 1956. The film is based on the life of famed clarinetist Benny Goodman, who recorded most of the clarinet solos used in the film. The film captures several major moments in Goodman's life but it has been described as less than accurate in details. Goodman's Jewish background is never explicitly mentioned, despite it playing a part in his artistic and personal endeavors for decades. In one scene, where his mother tries to talk him out of a romance with Alice Hammond, played by Donna Reed, whom Goodman eventually married, she says, "Bagels and caviar don't mix."