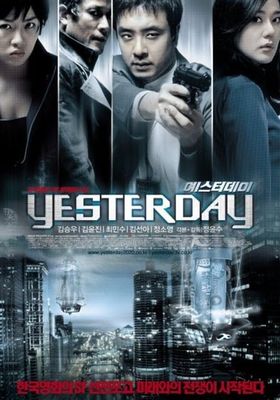 2002 ・ SF/Action ・ Korea
Rate
예스터데이
2002 · Korea · SF
2h 2m
In 1990, number of children suddenly disappear. Meanwhile, the Ministry of Defense selects an elite group of scientists for a top-secret mission. Then, 30 years later ... The year is 2020 on a reunified Korean Peninsula. A string of murders is committed against retired scientists. The Special Investigations (SI) unit staffed by a crack team from the former North and South Koreas and outfitted with the latest technology is brought in to investigate. The killer, however, far from being deterred, taunts them with a signature pendant at every murder scene. In an act of devilish boldness he even kidnaps the son of the investigation team's leader, Seok