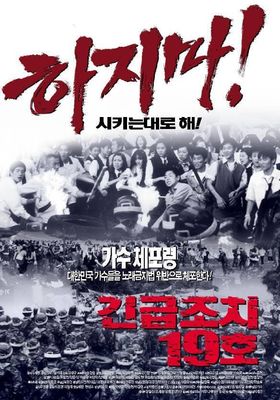 2002 ・ Comedy ・ Korea
Rate
Emergency Measure 19
2002 · Korea · Comedy
1h 41m
All around the world, musicians and rock stars are being elected to their respective countries' highest offices. Paul McCartney is running for Prime Minister of England; Madonna's being tapped as the VP in the United States. The current prime minister and head of the army in Korea are disturbed by this trend, and concoct Emergency Order 19 to deal with the problem: ban all music. The film is famous for the many pop music celebrity cameos it features.