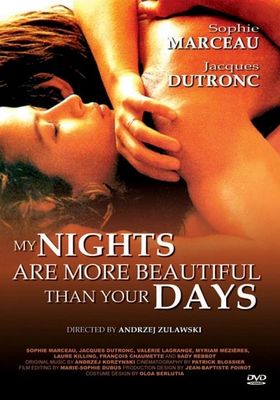 My Nights Are More Beautiful Than Your Days

1989 ・ Drama/Romance ・ France
Rate
Mes nuits sont plus belles que vos jours
1989 · France · Drama
1h 50m
A most whimsical, hurly-burly quasi-autobiographical love romp from the master of operatic intellectual romance! French pop star Jacques Dutronc is a genius computer programmer diagnosed with a terminal brain disease, and Sophie Marceau is the flighty main attraction of a hilariously surreal mentalist nightclub act. Embarking on a billowy, tempestuous May-September fling (mirroring Zulawski and Marceau’s own marriage), they both move through their respective childhood traumas, while simultaneously racing to retain Lucas’ grasp of language. A pastel-and-neon poetic feast not only on the visual level, but also literally, My Nights… astounds with its lush wordplay — for the only way that Lucas is able to progressively battle his own evaporating mind is to speak with increasingly rhyming and metaphorical flourishes, until the entire world becomes one big sweet-toothed, Zulawskian word-association game.