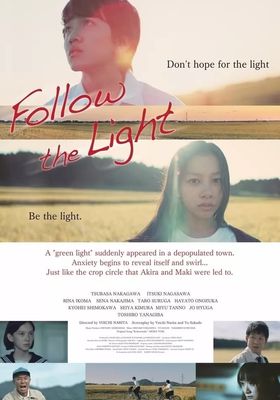 2021 ・ Drama ・ Japan
Rate
光を追いかけて
2021 · Japan · Drama
1h 44m
Washiya Town, Akita Prefecture, whose rice production is the main industry. It is a town with beautiful rice fields, but due to the declining birthrate, aging population, and declining population, the only middle school in the town has been closed for the current fiscal year. In September, the rice fields shine golden. Akira Nakajima who transferred to Tokyo with his father who made a U-turn from Tokyo witnesses a mysterious light in the sky. Following the light, a crop circle is formed in Hideo Sato's rice field, and Akira meets a beautiful girl, Maki, who lies there. The mystery circle, which no one knows yet, was supposed to be the secret of only two people ... Akira is forced to become an adult and Maki refuses to become an adult. The turmoil around the crop circles involves each other's family, friends, schools and towns, revealing their true intentions. What are the fate of Akira and Maki who run after the light? What is Hideo's choice for the future as a rice farmer?