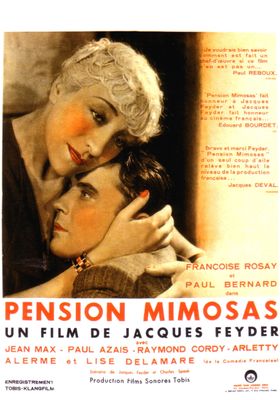 1935 ・ Drama ・ France
Rate
Pension Mimosas
1935 · France · Drama
1h 49m
Mr. and Mrs. Noblet run a boarding house on the French Riviera. One day, they are led by circumstances to welcome a little boy Pierre, whose father is in jail, into their home. Which makes Louise Noblet all the happier as she can't have children herself. But, after a while, Pierre's father is released from prison and reclaims his son... Time passes and Pierre, now a young adult, lives in Paris more or less on the wrong side of the law. He has a mistress, Nelly, who does not say no to other men's money... Louise, who still loves Pierre as her own son, wants only one thing - to help him get by.