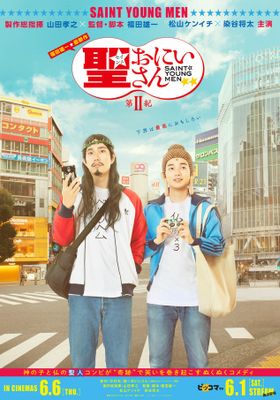 2019 ・ Comedy/TV Drama
Rate
聖☆おにいさん
2019 · Comedy/TV Drama
Japan
SAINT☆YOUNG MEN 2nd Century imagines a world where Jesus Christ (Kenichi Matsuyama; Death Note) and Gautama Buddha (Shōta Sometani; Himizu) take a vacation on earth and become roommates in an apartment in Tokyo. When the two attempt to hide their identities and partake in all that modern Japanese society has to offer, including cosplay in the otaku mecca that is Akihabara, hilarious antics are sure to ensue! From shopping for rice cookers to playing the lottery, not to mention an unexpected brush with the law—this film offers a refreshing and imaginative narrative of two supreme beings’ perspectives of the mundanity of everyday life in Japan. Based on the popular slice-of-life manga SAINT☆YOUNG MEN, serialised in Japan since 2006, this comedic series of vignettes featuring Jesus and Buddha are sure to put a smile on your face.