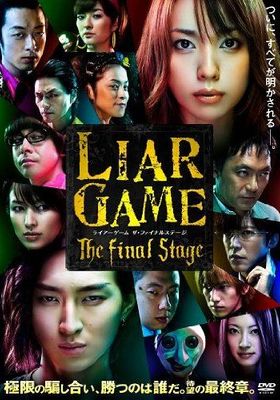 2010 ・ Drama/Thriller ・ Japan
Average ★3.4 (18k)
Rate
Liar Game The Final Stage
2010 · Japan · Drama
2h 13m
The Psychological thriller directed by Hiroaki Matsuyama dethroned US movie Percy Jackson and the Olympians at number 2 following its release this week at Japan Box Office. Starring Shota Matsuda and Erika Toda (Death Note). Based on a manga created by Kaitani Shinobu, this movie is set where the 2nd season of the drama series left off. In the first series, a college student Nao Kanzaki is lured into a mysterious game by tricking other players to win. However Nao got tricked by her former sensei, desperate for help, she enlisted the aid of person named Shinichi Akiyama. In the second series, the duo is faced against new opponents with the help of a rival player named Fukunaga . In Liar game: Final Stage, Players are encouraged to trust each other to win the tournament. However, a mysterious player named X is secretly plotting to sabotage everyone of their chances to win the LGT.