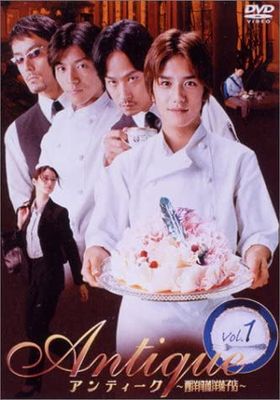 2001 ・ Fuji TV ・ TV Drama
Average ★3.3 (3k)
Rate
アンティーク 〜西洋骨董洋菓子店〜
2001 · Fuji TV · TV Drama
Japan
This story is about four men who work in a confectionary. Tachibana Keiichiro (Shiina Kippei) is the owner; Ono Yusuke (Fujiki Naohito) is the superb baker that has a mysterious and mesmerizing aura; Kobayakawa Chikage (Abe Hiroshi) is the waiter and close bodyguard of Tachibana; and last but not least is Kanda Eiji (Takizawa Hideaki), the ex-boxer who loves cake so much that he becomes a waiter at 'Antique'. This is a refreshing, yet heartfelt comedy about the 4 very unique personalities that work until the wee hours of the night at the small confectionary. The series follows the romance, family life, and most importantly friendship that these 4 men from different generations experience.