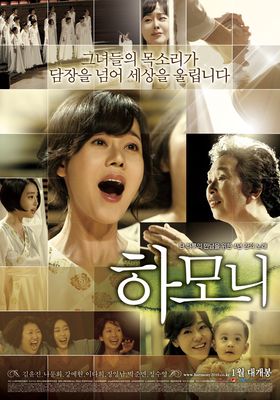 2009 ・ Drama ・ Korea
Average ★3.6 (643k)
Rate
하모니
2009 · Korea · Drama
1h 55m · PG-13
Moon Ok (Na Moon-Hee) was a musical professor at a university, but is now on death row for committing a crime caused by the abuse of her husband and mother-in-law. In prison she meets a young lady named Jeong-hye (Kim Yunjin) who killed her husband because of physical abuse. At the time of her arrest, Jeong-hye was pregnant and the baby was eventually born in prison. Now 18 months later, Jeong-hye's baby must be given up for adoption. To spend one day with her baby outside of prison, Jeong-hye forms a prison choir group. Moon Ok becomes the conductor for this choir. The inmates and prison officers are soon touched by the music produced by this group.