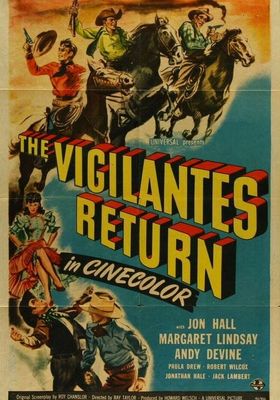 1947 ・ Western ・ USA
Rate
The Vigilantes Return
1947 · USA · Western
1h 7m
Marshal Johnnie Taggart (Jon Hall) , posing as an outlaw named "Ace" Braddock, comes to Bannack, Montana to restore law and order. But he is recognized by Kitty, co-owner with Clay Curtwright of the infamous Bull Whip saloon. But "bad-girl" Kitty keeps her mouth shut. When Johnnie's pal Andy reports a stage holdup, Curtwright's henchman, Ben Borden, talks the sheriff and Judge Holden into suspecting Johnnie. Johnnie reveals himself to Judge Holden as a government marshal, and the judge voices his opinion that Curtwright is the leader of the road agents, but voices it in the presence of his granddaughter, Louise Holden. The Judge doesn't know that Louise is in love with Curtwright, and she tips him off as to Johnnie's real identity. Curtwright frames Johnnie for a murder and arranges for the crooked sheriff to promote a lynching and Andy and Kitty help Johnnie escape jail. Johnnie rounds up vigilantes and heads for a showdown at the Bull Whip saloon