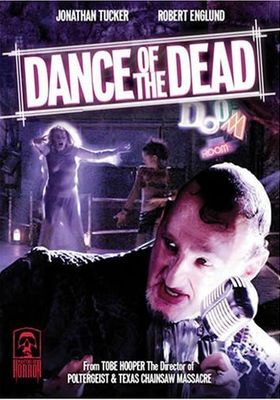 Dance of the Dead

2005 ・ Horror/Thriller ・ USA
Average ★2.7 (327)
Rate
Masters of Horror: Dance of the Dead
2005 · USA · Horror
59m
In a post-apocalypse society, 17-year-old Peggy lives with her over-protective mother and works in her restaurant. She misses her sister Anna, who died some time ago. When two couples of punks come to the place to eat some hamburgers, Peggy feels attracted to Jak, who invites her to go out on date with him later. Peggy goes out with Jak without telling her mother, and they go across town to a dark place, the Doom Room, where the master of ceremony is the ringmaster of a freak show with dead. The MC injects blood in the dead, and they dance on a ring for the exalted audience. When Peggy sees her undead sister Anna dancing in the show, the MC discloses the truth about her presence in the circus.