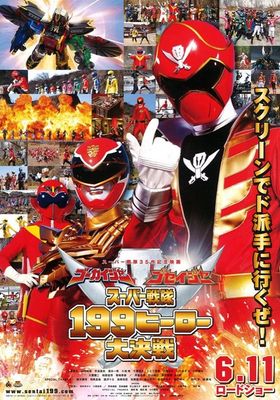 2011 ・ Action ・ Japan
Average ★2.8 (731)
Rate
ゴーカイジャー ゴセイジャー スーパー戦隊199ヒーロー大決戦
2011 · Japan · Action
1h 21m · G
The Space Empire Zangyack forms an alliance with the Black Cross Army and their revived leader, the Black Cross Führer, in order to invade Earth with the other Super Sentai enemies that were also revived. The Gokaigers, along with the Goseigers, who have lost their powers from the Legend War, must team up in order to fight against the new enemy.