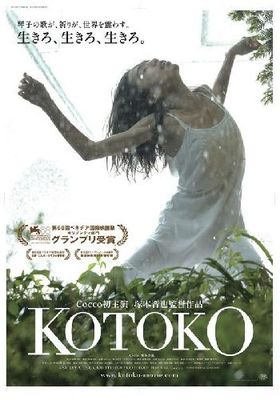 2011 ・ Drama ・ Japan
Average ★3.3 (197)
Rate
KOTOKO
2011 · Japan · Drama
1h 31m
A single mother (Cocco) becomes afflicted with double vision. Taking care of her newborn baby becomes a nightmare as the mother also becomes paranoid. The only time the mother doesn't see double is when she sings. She also finds solace in cutting herself, allowing her blood to drip free and able to feel alive. A terrifying nervous breakdown ensues. When things spiral out of control, her baby is taken away. She then rides a bus and sings to herself. A man (Shinya Tsukamoto) sitting nearby listens to her wonderful voice. He begins to stalk her. The man is an award winning novelist who has fallen in love with the woman. They begin a volatile relationship. The woman's paranoia a