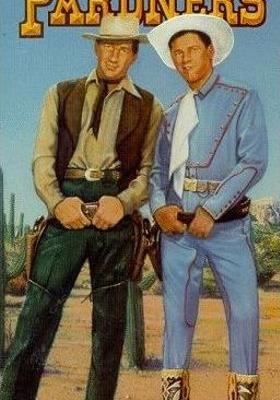 1956 ・ USA
Average ★1.8 (3)
Rate
Pardners
1956 · USA
G
Rich momma's boy Wade Kingsley Jr. an Eastern dude, tries to follow in his murdered father's footsteps by returning to the West to partner up with Slim Moseley Jr.,the son of his father's former partner. Wade overcomes Slim's initial reluctance to accept him by using his fortune to buy a prize cow and new car to help Slim in his job as foreman on the Kingsley family ranch, currently under siege by a gang of outlaws called "masked raiders." Wade generously tries to pay off the ranch's mortgage with $15,000 of his own money, but unfortunately neither "pardner" realizes that respected banker Dan Hollis, the son of their fathers' murderer, is the leader of the gang.