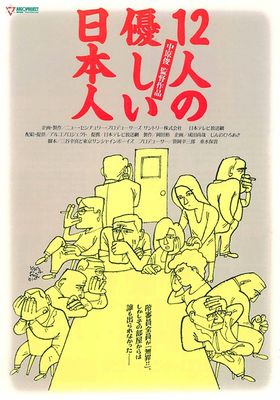 1991 ・ Thriller/Mystery/Comedy ・ Japan
Average ★3.6 (159)
Rate
12人の優しい日本人
1991 · Japan · Thriller
1h 56m
Shun Nakahara directs this comic take on Sidney Lumet's 1957 classic Twelve Angry Men. Just as in that earlier work, this film takes place in a jury room and takes place in real time. The film opens as the jury is about to acquit the defendant -- a bar hostess who pushed her ex-husband path of an oncoming truck, supposedly in self-defense. Just as everyone seems to be in agreement over the woman's innocence, one bespectacled juror (Kazuyuki Aijima) -- no one is given names in this film -- voices second thoughts. Slowly, like an inversion of Henry Fonda's character in the earlier film, he sets about convincing his fellow jurors -- a group of nice folks who don't like thinking ill of people -- that the defendant is in fact a cold-blooded killer.