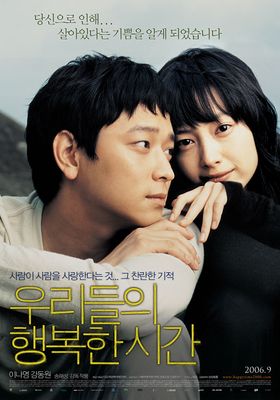 2006 ・ Romance ・ Korea
Average ★3.6 (520k)
Rate
우리들의 행복한 시간
2006 · Korea · Romance
2h 00m · R
About a convicted murderer awaiting execution, and the bond he forms with a suicidal young woman who starts visiting him in jail every Thursday. Yu-Jung (Lee Na-Young) has now attempted her third suicide attempt. Her disdain for her mother and indifference to the rest of the world, isolates her from any chance for happiness. Yu-Jung also has an aunt named Sister Monica. Her aunt often goes to prison to meet with death row inmates. Sister Monica meets a new death row inmate, who asks Sister Monica if he could meet her niece Yu-Jung. Sister Monica asks Yu-Jung if she would counsel this death row inmate and Yu-Jung reluctantly agrees to do so.