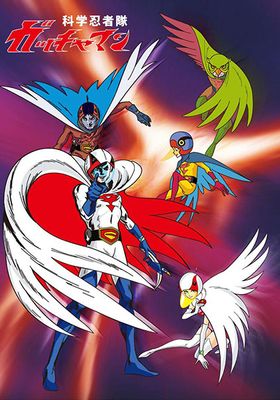 1972 ・ Fuji TV ・ Action/SF/Animation
Average ★3.5 (3k)
Rate
科学忍者隊ガッチャマン
1972 · Fuji TV · Action/SF/Animation/Adventure
Japan · PG-13
Science Ninja Team Gatchaman is a five-member superhero team that is composed of the main characters in several anime created by Tatsuo Yoshida and originally produced in Japan by Tatsunoko Productions and later adapted into several English-language versions. It is also known by the abbreviated name Gatchaman. The original series, produced in 1972, was eponymously named Kagaku Ninja Tai Gatchaman and is most well known to the English-speaking world as the adaptation titled Battle of the Planets. The series received additional English adaptations with G-Force: Guardians of Space and ADV Films' uncut 2005 release. Tatsunoko also uses the official translation Science Commando Gatchaman, as shown in numerous related products and media. Because the English-language versions are notoriously inconsistent not only with one another but also with the original Japanese series, viewers most familiar with the English versions often experience some confusion upon re-examining the series after a long hiatus. The original 1972 Kagaku Ninja Tai Gatchaman series was followed by an animated film, two sequel series, Gatchaman II, and Gatchaman Fighter. In the 90's, episodes from both series were dubbed into English by Saban as Eagle Riders. In 1994, the original series was remade as a condensed OVA series.